Heat waves are increasing in frequency, duration and intensity worldwide in response to climate change. As a result, the number of temperature-related illnesses are also on the rise, including respiratory diseases, heat exhaustion, heat stroke and even death

Heat waves are increasing in frequency, duration and intensity worldwide in response to climate change. As a result, the number of temperature-related illnesses are also on the rise, including respiratory diseases, heat exhaustion, heat stroke and even death

Heat is a major health risk

Exposure to excessive heat presents wide-ranging health risks. It can amplify existing conditions and result in premature death, disability and illness, including exacerbation of non-communicable diseases and the effects of air pollution.

Extreme heat is on the rise

Globally, extreme temperature events are increasing in their intensity, frequency, and duration. 175 million people were exposed to heat waves in 2015 alone, and from 2000 to 2016 the number of people exposed to heat waves increased by around 125 million. As a result of greenhouse gases in the atmosphere rapidly warming the earth’s climate, the intensity of global temperatures and frequency of heatwaves are set to increase for decades to come.

Heat impacts are predictable and preventable

The negative impacts of heat can be avoided with targeted actions, including:

How does heat impact health?

Rapid rise in heat gain due to exposure to hotter-than-average conditions compromises the body’s ability to regulate temperature, and can result in a cascade of illnesses including heat cramps, heat exhaustion, heatstroke, and hyperthermia. Even small changes from seasonal average temperatures are associated with increased illness and death.

Deaths and hospitalizations from heat can be rapid or delayed, and can result in accelerated death or illness in the already frail - especially during the first days of a heatwave. Temperature extremes can also worsen chronic conditions, including cardiovascular, respiratory, and cerebrovascular disease and diabetes-related conditions.

The scale and nature of the health impacts of heat depend on the timing, intensity and duration of a temperature event, the level of acclimatization, and the adaptability of the local population, infrastructure and institutions to the prevailing climate. The precise threshold at which temperature represents a hazardous condition varies by region, other factors such as humidity and wind, local levels of human acclimatization and preparedness for heat conditions.

Although heat-related morbidities are poorly registered worldwide, studies show a marked increase in the risk of death and hospitalization from NCDs when patients are exposed to excessive heat.

Mortalities attributed to mental and behavioural disorders are known to increase during heat waves, especially for those aged 65-74, and for persons with dementia, schizophrenia, schizotypal, and delusional disorders. Recent studies have shown a link between higher temperature and suicide frequency, noting the risk of suicide can increase by 1% to 37%, for every 1o C rise in ambient temperature.

Healthy Ageing and the Life Course

Populations around the world are ageing. By 2050, more than 1 in 5 people will be 60 years or older, and 80% of older people will be living in low- and middle- income countries.

Elderly populations are physiologically and socially amongst the most vulnerable to elevated temperatures. Older bodies are unable to dissipate heat and thermoregulate as efficiently, they are more likely to have a chronic medical condition that changes normal body responses to heat, and they are more likely to take prescription medicines that affect the body’s ability to control its temperature or sweat.

Older people may also be socially isolated and dependent on others for assistance. Many studies consistently report increases in cardiovascular and respiratory mortality and increased respiratory admissions during hot days and heatwaves.

There is growing evidence that the effects of heatwave days on mortality are larger when levels of ozone or PM10 are high, particularly among the elderly (75–84 years). The total daily number of deaths in this age group have been shown to increase by 16.2% on heatwave days with high ozone levels and by 14.3% on days with high PM10 levels, compared to an increase of 10.6% and 10.5% on days with low levels of ozone and PM10.

The mortality increase due to the combined effect of heat and air pollution can be reduced by decreasing exposure to PM10 and ozone on hot days.

Core temperature elevation and dehydration cause physical fatigue, irritability, lethargy, impaired judgment, vigilance decrement, and loss of dexterity, coordination and concentration, which can compromise occupational safety and lead to increased accidents. Heat conditions decrease worker productivity during the hottest months of the year, with economic consequences for families and national economies.

No population can avoid exposure to rising ambient temperatures. However, some populations are more exposed to or more vulnerable to physiological stress, exacerbated illness, and an increased risk of death from exposure to excess heat. Especially vulnerable populations include the elderly, infants and children, pregnant women, workers, athletes and attendees of outdoor events (e.g. music festivals), and the poor. Gender can play an important role in determining heat exposure. 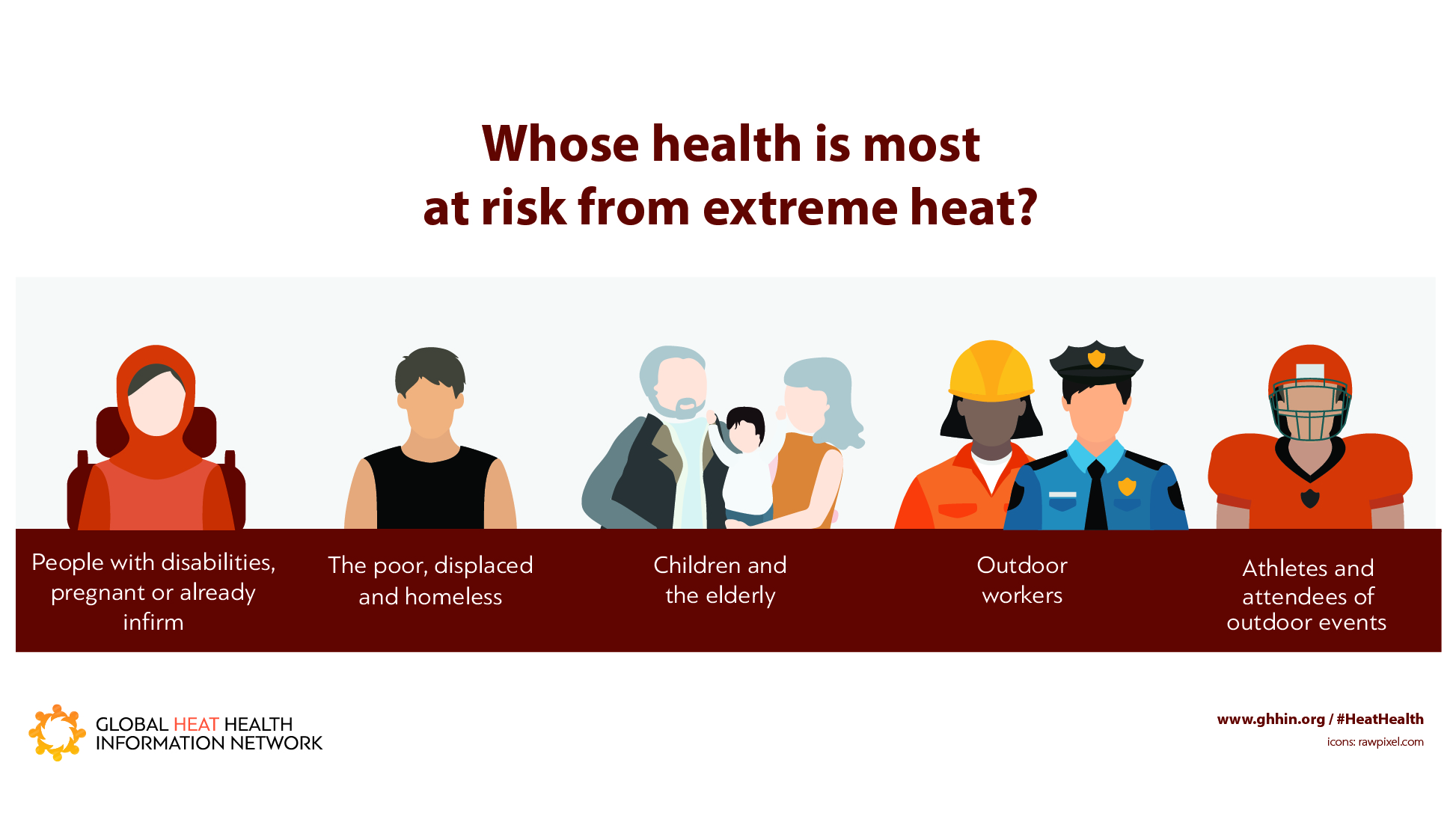 Due to the urban heat island effect, urban environments can magnify exposures to heat stress, and present other conditions of population vulnerability, such as poor housing in informal urban settlements.

How vulnerable a population is to temperature extremes depends on their combined demographic, health, physical, socioeconomic and institutional profile:

The physiology of older people and the very young renders them more vulnerable to temperature extremes. They may also be less able to adapt their behaviours or environmental conditions and may be more dependent on others.

When temperatures become more extreme, most people take some action to adapt to the conditions. However, some factors limit the ability to adapt, such as age, poor health or economic circumstances, and certain belief or value systems may also mean that appropriate action is not taken in response to the temperature conditions.

People spend approximately 80 % of their time indoors, with the elderly or unwell spending longer periods indoors. Buildings (including homes, hospitals, schools and prisons) are not always adapted for temperature extremes and may have insufficient heating/energy efficiency or cooling measures.

People who are socially isolated are more at risk from temperature extremes because they are less able to access community support, and may also have additional health or other vulnerabilities.