Join NASA ARSET’s three-part Satellite Remote Sensing for Urban Heat Islands online training, beginning on November 10.  This will be ARSET’s first training on UHI and will be in collaboration with the National Integrated Heat Health Information System (NIHHIS) and the Global Heat Health Information Network. Sessions include guest speakers from NASA, USGS, NOAA, and Portland State University. There is no cost to participate and no prior experience is required. The following editorial introduces the concepts and topics covered in this virtual training series.

Heat stress accounts for more than 600 deaths in the US annually (CDC). This problem is especially prevalent in urbanized areas. Why do more people per capita die of heat in the city than outside of it?

What is an Urban Heat Island?

There is an artificial weather phenomenon called the “urban heat island” (UHI) effect. In essence, the effect is just as the name implies, an island of heat in urban areas.

This is due to the impervious surfaces (e.g. paved roads, parking lots, and roofs) that cities are comprised of. These surfaces are especially good at trapping heat, but not so good at letting it go. Because of the way these surfaces trap heat, the ambient temperature in the city will often be higher than the surrounding areas, with the greatest difference in temperature occurring at night. This is important to note, since heat stroke susceptibility is dependent not just on the ambient temperature, but also a person’s ability to cool down effectively at night so their body can recover. This is one of the reasons the urban heat island effect is so dangerous. Tool tip Learn more about heat in city.

Land surface temperature is not the same as ambient temperature, and variations occur depending on the time of observation, but it is frequently used as a proxy for ambient temperature. If the surface of a stove is hot, it’s a good bet that whatever is sitting on top of it is pretty toasty too.

To further refine the analysis, field temperature readings are usually collected by boots on the ground to validate and supplement the data collected from space. With these satellite observations we can create a temperature map of the city and the surrounding areas.

These maps can be especially useful when paired with other data such as surface type or land cover and human data such as socioeconomic, demographic, and health variables. Through these types of analyses we can gain a holistic view of the heat situation on the ground and how it has changed over time. 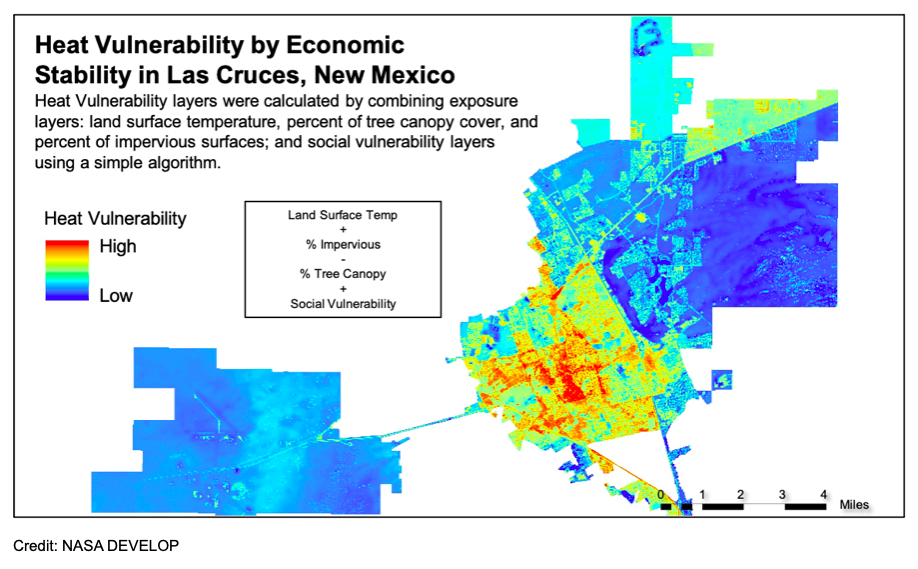 With increasing urbanization and rising temperatures, this topic will only become more important in the future. If you are interested in getting in on the action and learning how to map out the urban heat island in your city, join the Applied Remote Sensing Training (ARSET) program for a three-part online training, beginning on November 10.

During the first session of this training series you will learn how to estimate LST in Google Earth Engine using Earth observations from Landsat. You will also be presented with background information on urban heat islands (UHI) and have a chance to familiarize yourself with satellites and sensors that can be used to map them.

The second session of this series will introduce you to UHI case studies and go over methods for integrating in situ observations with satellite imagery for select US cities.

The third and final session will cover long term mitigation strategies and present a case study of UHI and land cover in Huntsville, Alabama.

Sessions include guest speakers from NASA, USGS, NOAA, and Portland State University. There is no cost to participate and no prior experience is required. For more information or to register, visit appliedsciences.nasa.gov/arset.