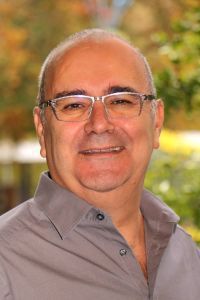 Prof. Dr. Andreas Matzarakis is leading since August 2015 the Research Center Human Biometeorology of the German Meteorological Service in Freiburg and responsible for the Heat Health Warning System in Germany. Appointed as extraordinary Professor at the University of Freiburg since October 2006. He received a degree in Meteorology in 1989 from the Physics Department, Ludwig-Maximilians-University of Munich in 1989 and a Ph.D. degree in Meteorology and Climatology from the Aristotle University of Thessaloniki. From 1995 to 2001 he was a scientific assistant at Meteorological Institute of the Albert-Ludwigs University of Freiburg and earned his habilitation about the "thermal component of the urban climate” in 2001. He is appointed to Professor at the University of Freiburg in October 2006. His research is mainly focused on urban climatology, human-biometeorology, tourism climatology and climate impact research. Several models and tools in applied climatology and biometeorology i.e. RayMan Model, SkyHelios Model and CTIS (Climate-Tourism/Transfer-Information-Scheme) have been developed by him.

Find resources from this expert in our library