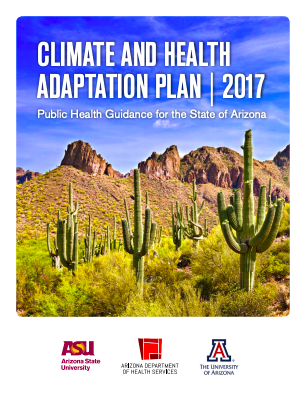 The Arizona Extreme Weather and Public Health Program’s primary climate-sensitive hazard topics include extreme heat, wildfires, air quality, drought, flooding, extreme cold, and vector-borne diseases. Extreme heat is a major concern to Arizona and a large focus of their work due to the frequency and severity of extreme heat events. A large portion of the state’s population is frequently exposed to outside temperatures above 100 degrees from May through September. Arizona experienced about 1,200 heat caused deaths during 2007–2017. In addition to extreme heat, the arid climate leads to other hazards such as flooding during monsoon season and more wildfires due to increased drought and high temperatures.


The Arizona Extreme Weather and Public Health Program facilitates the development and sharing of local knowledge of climate and health effects and the implementation of public health interventions for climate-related hazards affecting the state’s residents and visitors. Partnerships have led to several projects on extreme heat, such as heat alerts sent to schools and public and healthcare facilities that provide steps for heat safety. Additionally, local projects have assessed and improved cooling center networks, which help provide a cool space to get out of the heat during the summer. The program has created and distributed heat safety toolkits for various specific at-risk populations, including outdoor workers, older adults, and school children. The program and local partners have also increased their capacity to perform heat illness surveillance activities and coordinated a state heat preparedness workgroup.


In addition to adapting to the challenges of heat, other work has focused on understanding climate impacts on vector-borne diseases and the fungal disease called Valley fever. The program has also assisted in developing public health emergency response plans for wildfires and flooding. This work benefits various populations such as the homeless, elderly, children, local officials, and residents of low income and minority neighborhoods.